How We Learn Some Animals Don't Matter

I enjoy middle grade chapter books. I read all sorts of other books too, but well written books written for kids in grades 3-6 bring me as much joy in my 40s as they did when I used my entire allowance ($5 every other week) to buy them. It turns out they are also perfect pandemic reading.

Last night I had to stop reading one I was well into. There were some problems early on, but I try to give a book a fair chance and I hoped this one would live up to the potential of its funny premise; a boy wants a dog but his father says no, so his mother surprises him with a guinea pig who happens to act like a dog. It sounds like some lighthearted fun sure to be full of funny mishaps and misunderstandings, right?

Here's my review from Goodreads.

Guinea Dog (Guinea Dog, #1) by Patrick Jennings (Goodreads Author)
Rating: 1 star = did not like it
bookshelves: didn-t-finish, middle-readers-8-12yrs, audio-book
I wanted to like this book. In the beginning the main character's observations are pretty funny and it has the usual kids' perspective that adults are nuts.
The book shows some truly unacceptable behavior as normal. The main character repeatedly puts his guinea pig in his backpack (just a normal one, no modifications to allow fresh air in) for hours without food or water. He admits the animal pees and poops in the bag but never  never thinks, gee, it might not be good for an animal to be in a small enclosed space covered in feces without food, water or fresh air for hours. You can't chock it up to kids not knowing any better because the mother sews a patch over a hole the guinea pig chews in the bag to ensure the guinea pig stays in the next time. There's even a scene where the boy "tosses" the bag with the guinea pig in it three times! Would any of us read a book where a puppy was treated this way?
I realize that the author's depictions of the father menacing his son at the doorway after school are probably meant to be over the top to show the child's perspective, but both the child and the mother cower when the father enters a room. They hide their personalities and give in to the father's wishes. The father dismisses the mother's opinions and treats her as just a silly woman.

The mother does poke fun at the father's grumpiness in a couple scenes. She also tells the son to make allowances because the father is stressed, so I think we're supposed to understand the father is not acting like himself. That would be fine, normal even, if she and the son didn't appear scared to upset the father. The mother repeatedly tries to placate the father like a person in an emotionally abusive relationship.

My last criticism is what made me give up on the book after getting through over half of it. Out of no where the author starts giving the main character inner monologues full of the "wonder of life" and the "importance of not judging anyone by their exterior". There's no gradual growth in the character, he is just suddenly rhapsodizing over clichés. The tone of the inner monologue switches entirely as if Rufus were taken over by an alien that thinks like an after school special from the 80s. Zero subtlety.
So for normalizing animal cruelty, anti-women stereotypes, emotional abuse I suggest you steer clear of this book.

When we learned that Lady probably,

(no the vet could definitely not be certain),

had cancer and that all signs suggested it had spread to her lungs,

The vet, a stranger I'd only gone to because our regular vet was out of town, spoke quickly. She'd called with test results a full day later than she'd told me she would, and now spoke with the speed of someone who wants to get an unpleasant task over with.  She explained, "The x-ray showed a large medicalwords in her abdomen blocking the flow of medicalwordsmedicalwords, resulting in medicalwordsmedicalwords leg." That, for what it was worth, was definitive.

"So there's a tumor in her abdomen and something that should flow through her leg and on to other parts of her body can't because of it." I offered hesitantly. "That's why her leg is swollen." The vet made a sound indicating agreement and repeated some of her previous medical words as if they would now hold meaning for me.

"And anesthesia is pretty risky for rabbits and Lady is elderly," I finished for her.

"Let me see if I understand. All signs indicate Lady has cancer that can't be operated on because it has spread through her body. But you can't be 100% positive because the test for that would probably kill her?"  I added quickly before she could add her equivocating word soup.

This was no longer awkward, it was maddening. I understood that all the equivocating and medical jargon was an effort to be precise and not make a diagnosis she couldn't back with facts. She also didn't know me. She didn't have any idea how I would take this news, this bad, bad news.

But why the hell was I, the emotionally involved party, now in charge of moving the conversation forward? She was the professional. She was the one with the experience and information. This should be her responsibility. 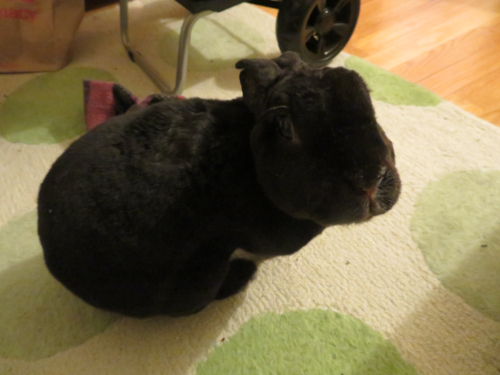 Lady with cancer and the added indignity of "the snuffles", a respiratory infection

"The usual course in treating medicalwords is surgical removal, which is not an option in this case due to medicalwordsmedicalwords."

I remembered those smudges on the lungs in Lady's x-ray and made a sound indicating comprehension. She continued, "Chemotherapy has been developed for cats and dogs, but it has not been found to be effective in rabbits."

As disapointing as this news was, at least I understood it.

"What. Do. We. DO?" I emphasized the last word. I wasn't asking how we return Lady to health or even how we extend her life. I jut needed a plan, a step by step guide to making her  final days as easy, joy filled and comfortable as possible.

"Keep giving her the Metacam for pain relief and monitor her for any signs of distress. I will send a copy of her tests to your regular vet."

It wasn't until I hung up the phone that I realized I had no idea how to spot distress in an animal whose every instinct is to mask it.