"Dumb bunny!" is a mild oath that Alex has used for as long as I've known him, well before rabbits entered our home.  It's the sort of thing he'd say if he locked the door, then realized he'd left his sunglasses inside.  He doesn't say it so much any more.  I don't think it was a conscious decision; it's just the natural result of living with and loving these furry beings.

Rabbits certainly don't think like you and me (notice the name of this blog), and they aren't motivated by the same desires as dogs and cats, but that doesn't make them dumb.   Just like we wouldn't call a toddler dumb if she sees melting snow drip off the roof and says "It's raining"; rabbits aren't dumb when they chew on cords.  From their point of view the cords are roots in their burrow, blocking a path of escape.  Their behavior makes perfect sense - in bunny world.

Rabbits are trainable.  The most extreme example of training I know of is a rabbit steeplechase.  Seriously.  Go ahead and take a moment to Google it.  On the other end of the spectrum is litter box training.  All three of the rabbits that we've lived with came from shelters and had been trained by their previous owners (another good reason to get your rabbit from a shelter).  From what I've read, the process is pretty simple.  Rabbits in their burrow tend to do their business in designated areas.  So, once your rabbit has settled in, watch to see where your rabbit has chosen for that purpose and put a litter box there. They catch on quickly.  Giving a treat when you catch them in the act helps the process along.  If you've ever been involved in potty training a child, this will feel quite familiar. 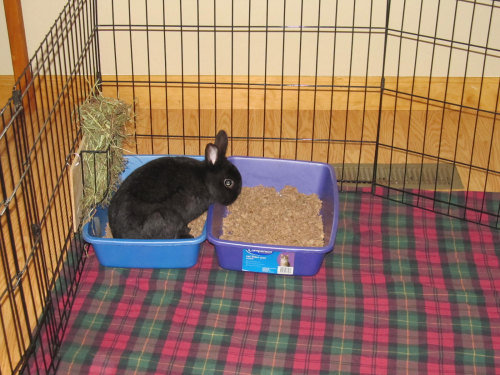 We've taught all of our rabbits that "pet pet" is an invitation to come over and get some loving.  If they're interested, they come over.  If they're not, they don't.  They're a lot like cats.  Our training program was very simple.  We just said "pet pet" a lot in soothing tones while petting them.  Later when calling them to come over for some attention, we'd say "pet pet" and hold out our hand.

Without trying to, we also taught Lady to return to her pen.  She'd figured out that when we got her back in her pen at bedtime we always gave her a treat.  Soon enough, hearing the rustle of the bag or Alex's call of "Who wants papaya?" was enough to have her running excitedly in circles then dashing into her pen.  I tried to teach her "up in the pen" as a command to go with it, but it didn't take.  Maybe it was too long.  Maybe it was the fact that Alex and I said different things.  It didn't matter.  Rustling the bag always worked, so we were all set.

When we got Fergus and the two of them bonded, he learned the routine from Lady.  He was older than her and would sometimes watch bemused as she ran in circles, but after a moment or two he would join her in dashing to the pen.  I may have been a bit smug about how well we'd "trained" our bunnies.

Eventually dear old Fergus died and Bella, a puppy-like one year old came to live with us.  Lady and Bella did not take to each other.  For their safety, they do not play together.  They do not spend unsupervised time together.  Lady is not going to teach this interloper (her word, not mine) what to do when you hear the rustle of the treat bag.  If Lady had her way, Bella would not even know treats exist. 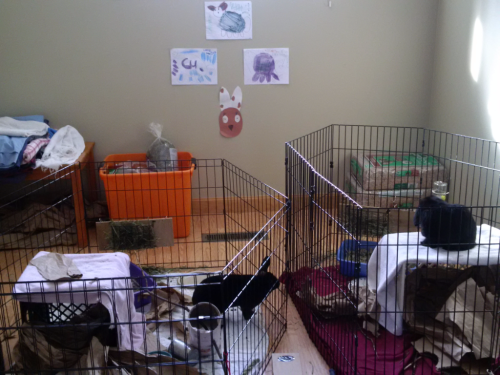 Lady (left) and Bella with a safety gap between their pens

Each day after they've had breakfast we bring one bun upstairs and let the other one run free downstairs.  Lady is an adult and has come to accept that sometimes you have to do something you don't like (such as being picked up) in order to get something you want (a change of scenery).  She's not thrilled, but she'll let us do it.

Bella on the other hand is 1 year old.  She senses she's about to be scooped and dashes behind the couch.  When we follow, she escapes out the other side and hides under the dining room table.  By the time we move a chair to reach for her, she's off in the opposite direction!  More than once I've stood in the middle of the room and said "I'm a human, I should be able to outsmart you", but escape is a bunny's super power. 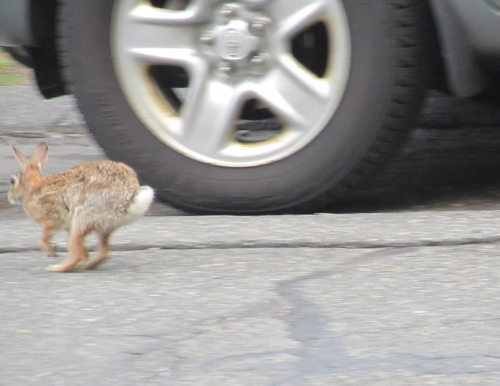 By the time Bella gives in and lets us catch her, all the furniture in two rooms has been moved and we're trying, really trying, not to get mad.  "Can't blame a bunny for being a bunny" Alex reminds me.  That's true, but try telling your boss you'll be late because you have to catch your rabbit!  Thank goodness she's an animal lover.

So when I saw cats being clicker trained on the show My Cat from Hell (Animal Planet), I decided to give it a try. We bought a couple plastic clickers at the pet store (about $4 each), got some books from the library on clicker training dogs (couldn't find any on other animals) and got started.

The first step is to teach the animal that this strange sound means something good will happen.  So you click and give a reward.  The first time Lady heard it she thumped and froze.  After nothing bad happened she noticed the 1/2 raisin I was offering her and relaxed, gobbling it down.  After that she'd see me with the clicker in my hand and she'd run over, sniffing for the treats.  Bella took a little longer to catch on, but in a couple days she'd figured it out too.  I'm feeling cautiously optimistic.

A friend came over recently with her two young boys (ages 5 and 6).  They were able to click and have Lady come over and eat out of their hands.  The delight on their faces as her fuzzy face tickled their palms was the highlight of my week!

So now we move on to step number 2, connecting the click with desired behaviors.  I'll let you know how it goes.

Binky - v. + n.  a sudden vertical jump while twisting the head and body in opposite directions.  Often occurs mid run.  An expression of ultimate rabbit joy.  The word 'binky' is misleading.  It sounds cute and babyish (like a beloved blanket or pacifier), whereas the rabbit binky is athletic, like the midair twists of a bucking bronco.  In fact, Alex and I call them 'broncos'.

Bunny - n. rabbit  I know you didn't need that defined, but I'm curious how we ended up with two such different names for the same animal. I suspect there's a backstory of invasion and language mingling (this is why we raise 'cows' but eat 'beef'), but for now all I can say is that I'm looking into it.

Burrow - n. a hole or tunnel where rabbits live.  It is also the name of the Weasley family's ramshackle home in the Harry Potter series.  Coincidence?  I don't think so.  An average rabbit litter is six kits.  Guess how many children are in the Weasley family.

Chin - v. when rabbits rub the scent glands in their chins on an item to show possession.  I've also read that it's the rabbit version of writing "I was here" on picnic tables and the like.  Fortunately, the scent is undetectable by humans so they can chin to their heart's delight with no problem.

Crepuscular - adj. active at dawn and dusk (twilight).  Rabbits (like cats, bears, skunks and a host of other crepuscular animals) spend the day dozing.  They may wake up for short spells and move around, but they quickly return to napping. 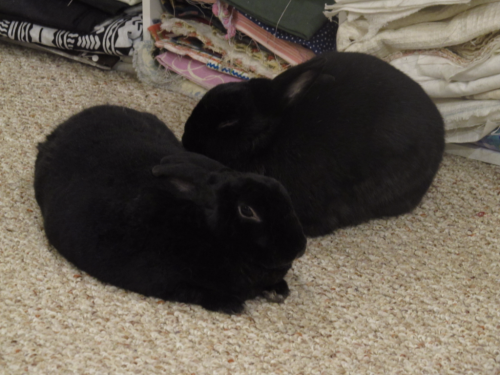 Dew claw - n. a thumb-like claw, on the front paws,  that doesn't reach the ground.  In my experience, rabbits tend to gnaw on this nail, keeping it short enough that guardians don't need to trim it.  Dogs also have dew claw

Dewlap - n. loose flesh and fatty tissue hanging from the neck.  It is more prominent on does than bucks.  When a doe is pregnant, she pulls fur from her dewlap to line the burrow in preparation for the birth of her young.  Before I knew much about rabbits, I looked at Lady's dewlap and worried she might have a thyroid issue.  Just imagine if I'd brought her to the vet to get tested! 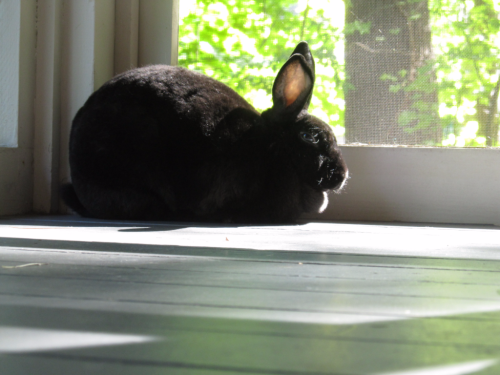 Lady showing off her dewlap

Flopped - adj. a rabbit stretched to its full length in a state of complete relaxation and trust.  Some rabbits literally go from standing to flopping down on their side (scaring uninitiated caregivers).  Others prefer a partial flop.  They sit in typical bunny-loaf position (picture a football with a head), then stretch out Sphinx-like on the ground with their rear legs twisted to the side. In either version, the rabbit is letting down her defenses, choosing a position that would hinder escape.  For a rabbit to trust you enough to allow you to pet her while she's flopped is a gift, a blessing, a golden moment of inter-species trust.  It's as unlikely and sacred as a wild bird landing in your hand.  Flopped, a rabbit's body feels squooshy, boneless, perfect for wriggling through subterranean tunnels or under garden gates à la Peter Rabbit. 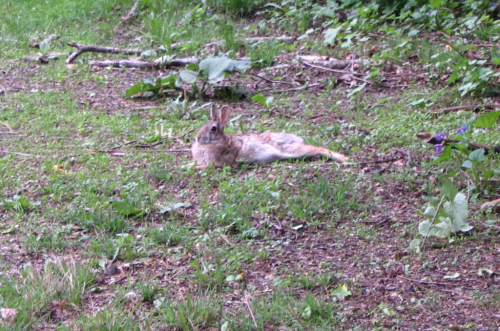 G.I. Stasis - n. medical condition where the gastrointestinal system slows or stops working.  Gasses build up and the rabbit stops eating or drinking.  It's a serious situation with countless potential causes ranging from overgrown teeth to a sudden change in diet.  Left untreated, it can kill a rabbit in a day or two.

If you'd like to learn about early detection and prevention The House Rabbit Society has an excellent article.   Lady has had it twice in the three years she's lived with us.  In both cases a rushed visit to the vet had her feeling much better and acting like herself a few hours later.

Lagomorph - n. "any of an order (Lagomorpha) of gnawing herbivorous mammals having two pairs of incisors in the upper jaw one behind the other and comprising the rabbits, hares, and pikas."  Thanks to Merriam-Webster online for the definition.  I've heard that rabbits are more closely related to deer (sharing a common ancestor) than rodents, but I haven't verified it.  If you happen to know whether or not it's true, please leave a comment.

Pellet - n. 1). a fortified food sold at pet stores specifically for rabbits. 2). Rabbit poo.  There's something both apt and confusing about using the same word for what goes into a rabbit's mouth and what comes out the other end.  In our house we call the food "pellets" and the feces "poo".  Don't worry, you'll get to read a lot more about poo in an upcoming post.

Scut - n. a rabbit's tail.  This is one of my favorite words in the English language. It's such a funny bit of trivia and the word even looks like the body part it represents, all compact and round.  I'm sure I will write a post devoted to the scut one of these days, but for now I'd just like to point out that the /^t/ sound quite appropriately makes you think of a word with a similar sound and meaning.  You guessed it, 'but'. 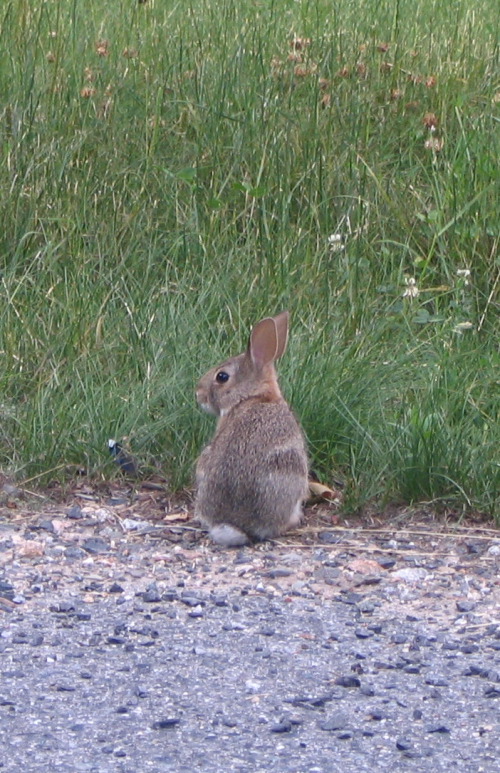 Thump - v. + n. a loud sound created by the quick raising and lowering of the hind feet, but you probably figured that out since it's a great example of onomatopoeia.  The thump can be an alert, informing other rabbits of potential danger nearby, or an expression of anger (picture a two year old not getting her way). It is not a sign of joyful excitement.  Sorry Disney.