If rabbits could talk, I'm sure Lady would be quick to explain that she was here first and that she and only she gets to decide what other bunnies can share her space. She would also explain that she's an excellent interior designer, finds joy in rearranging her environment, runs for fun, likes to play "toss" (not catch, that's for dogs), and has a passion for digging.  I'd like to think that she would also thank us for changing her name from the dopey sounding Booboo that her first family called her, to Lady.  Alex named her after one of the direwolves in Game of Thrones; I love the incongruity of naming a 4.5 pound prey animal after a mammoth predator. 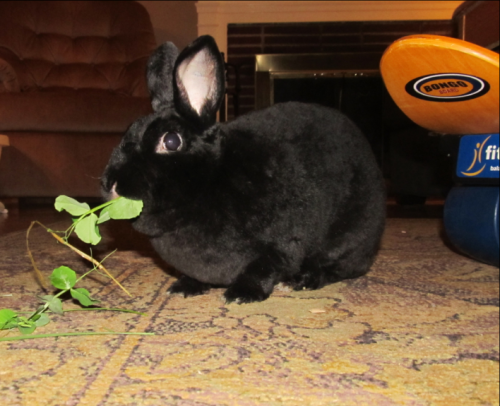 When Lady lived with her first family, she was one of two rabbits in the home.  She and the buck (male rabbit) were a bonded pair, the rabbit equivalent of BFFs.  When Lady was four, the family moved to an apartment that didn't allow pets, so the rabbits went to the MSPCA.  I picture them being housed together, comforting one another as they got used to all the new smells and sounds, not to mention the stress of being surrounded by unfamiliar rabbits and humans.  Sadly, Lady's buddy was sickly, and just a couple weeks after arriving, he died.  The staff at the MSPCA told us that Lady was lethargic after his death.  They gave her extra love, and placed a stuffed animal in her cage to help her feel less alone.  For weeks she groomed that toy and snuggled against it.

When Alex and I visited the MSPCA she'd stopped grooming the stuffed animal and was quite interested in all that was happening around her.  I was instantly drawn to her because in size and shape she resembled the wild rabbits I'd tried so many times to get close to.  The Bunny Room at the MSPCA had bonded bunnies that had to go home together, giant rabbits the size of Corgis, Lionheads, Angoras and everything in between.  Alex and I had decided on the way over that we wanted one rabbit; we'd never so much as held a rabbit before so one felt like plenty of new responsibility to take on.  We knew we wanted it to be on the small side (though not a dwarf because they tend to have a shorter life expectancy), and no pink eyes.  I'm embarrassed to admit that last criterion was all me.  Alex thought a white bun with pink eyes would be adorable, but those eyes looked a bit creepy to me.

Each cage had some information about the rabbit, its name, approximate age, breed and depending on how it had come to the shelter, a bit about its personality.  Lady's tag said that she was friendly, liked other rabbits, enjoyed watching TV and was litter trained.  She sounded perfect, though looking at her cage I had my doubts about the last part; there were Cocoa Puff-like droppings scattered across its floor.  Years later I now  know that even a well trained rabbit will mark its territory if unfamiliar or enemy rabbits are around.  It's the rabbit version of a white picket fence...or maybe chain link.  It turned out that once Lady got settled in at our house and started to feel at home, she stopped tagging her pen with poo and used the litter box like the lady she is.

She has now lived with us for a little over three years and has utterly rearranged our lives for the better.