Alex and I had lived with Lady for a year when we decided we were up to the task of caring for two rabbits.  We had the room.  We had the equipment.  And everything we read said that rabbits are social animals and feel safer and more at ease with another rabbit around; there is safety in numbers after all.  So we went back to Nevins Farm (the closest shelter with rabbits) to see who they had available.  We wanted a rabbit similar in size to Lady (about 5 lbs) with a friendly temperament, who was litter box trained.  Oh, and no Angoras, because I am not willing to deal with all that crazy fur.

They had so many rabbits that the bunny room was full to capacity and another room down a hall and through a door labelled Employees Only had been converted to house more.  We would have missed that second room entirely if we hadn't asked a volunteer which rabbit she recommended for our situation.  Without a moment's hesitation she said she knew just the fellow.  His name was Cody and he'd been overlooked so often, but he loved to be brushed and pet.  As she lead us to the converted bunny room she said not to be put off by his appearance; he was in mid molt so even though she'd spent a good 30 minutes brushing him the day before you'd never know it to look at him. 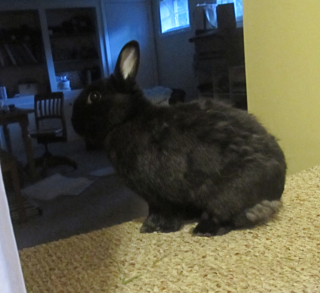 She wasn't exaggerating.  When we got to the room, she opened a cage and lifted out a tiny black creature with stubby ears, fish eyes rimmed with red and scruffy black fur.  He was smaller than Lady (just 4 pounds) and a short hair, which was good, but it was not love at first sight.

"He had a bit of cage aggression when he first came, but he's doing much better now", the attendant informed us.  Aggression?  I barely registered the word before the attendant settled the tiny rabbit in my arms. As if to distract me from his past, he quickly climbed up my chest, nuzzled his wee head under my chin and snuggled into my chest.  As the attendant told us what was known about the rabbit, Alex and I took turns holding him.  If we stopped petting him, his head would pop up quizzically, but otherwise he seemed perfectly content.  Lady would never have put up with being held so long. 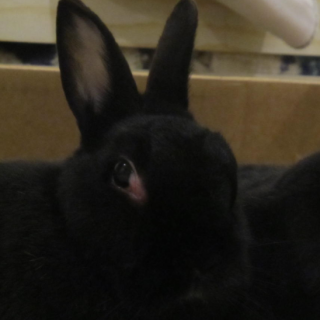 It was unclear if he'd had one or two previous owners.  What was known for sure was that he had been turned in to the shelter by a family whose children had lost interest in him.  That was in October, a good 8 months earlier.  Cody had been at the shelter longer than any of the other rabbits.  There was no reason why he should have been hard to place other than his color.  He was pure black, except for the temporary gray patterns his molting fur created.  Black animals are simply harder to find homes for.  It's hard to see their  facial expressions in photos.  In person their color often means that they fade into the shadows of their cage.  Actually, when Cody was returned to his cage he cowered in the back corner, keeping a wary eye on anyone who approached.  And those eyes.  My goodness, they looked like they would fall out of his face at any moment, like marbles that had been glued on as an after thought.  I felt a bit queasy when I looked at them.  But he was sweet and we just couldn't condemn him to more time in that adequate, but oh so limited space.

After a few forms and the writing of a check we were buckling his carrier into the back seat and driving home. As we got to know him, we pieced together some more details about his past.  Even by rabbit standards, he did not like sudden movements or being approached quickly.  It made us wonder if the kids who had owned him before weren't all that gentle, or picked him up a lot.  No rabbit wants to be picked up; it triggers all sorts of primordial fears regarding owls, foxes and becoming dinner. This fellow would lunge and bark (yes, bark) if he sensed any possibility that he was going to be scooped.  It was the combination of this fighting spirit and jowly face that earned him the name Fergus.  He reminded me of a cross between the Scottie in Lady and the Tramp and the warrior Fergus on the short lived TV series Roar.  He was a grumpalump who longed to be pet, and brushed and loved.

He was part of our family for a wonderful year and a half, before dying at age 9*. *If you google rabbit life expectancy you'll get a wide range of answers, even once you narrow it down to pet rabbits.  As more rabbits are living in houses with their people (rather than in hutches), they are safer and tend to get more medical care, so their life expectancy is longer.  It makes it hard to compare a rabbit's age to a human's. Having said that, a nine year old rabbit is without a doubt a senior citizen.

The comments to this entry are closed.