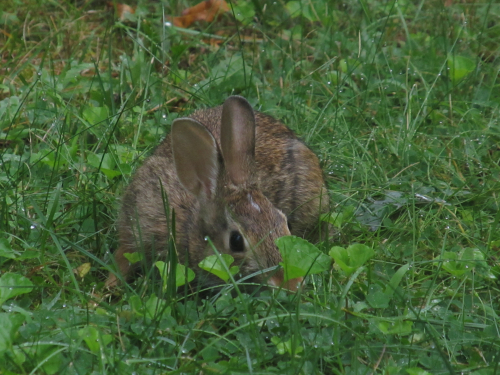 Spot has lived under our shed the last two years

In case you've missed me saying it before, rabbits need an unlimited supply of hay in order to stay healthy.  Those cute bags of rabbit granola/cereal they sell at the store are tempting bags of gastric distress.  They look a lot like human cereal with brightly colored treats dotting the brown roughage.  The difference is that the neon marshmallows in human cereal aren't good for us, but they aren't going to land us in the emergency room.  That's not the case with rabbits.  The "treats" are usually corn or dairy based, two foods that the rabbit GI system is not designed for.  They may not cause a problem the first time a rabbit eats them, but eaten consistently there will be.   Plain pellets, such as these from Oxbow are a healthy diet supplement.  Some owners mistakenly think they are equivalent to dog kibble, but these are too rich to fill that role.  It's unfortunate, since that would make living with rabbits much tidier.  Nope, rabbits need to eat a pile of hay roughly the size of their body each day to ensure good digestive and dental health.  It also reduces the chance that they'll chew on your furniture.

The good news is that hay smells really good, unlike canned dog or cat food.  I grew up across the street from a horse barn so the smell of hay reminds me of long summer nights playing flashlight tag and days spent riding my bike and building forts.  The problem with hay is that it gets e.v.e.r.y.w.h.e.r.e!  It's impossible to grab a handful of hay and put in it in a hay rack (a.k.a. manger) without some falling on the floor.  Then there's all the hay the rabbits pull from their racks and toss to the side in search of the elusive perfect mouthful.  I don't really mind if they make a mess of the hay in their pens, they will often return to it for a snack, but the upstairs rack is in our dining room.  It is our least used room, but it would still be nice for it not to resemble a barn.  Each time we feed the bunnies or refill their water, we walk on hay.  Bits cling to our socks, spreading the hay from one end of the house to the other.

We've tried a variety of hay racks designed for small animals.  The slats, whether metal or wood, are too close together for a rabbit's snout, even Lady's slim one.   I tried cutting off alternating slats on a wooden rack, but the rabbits ignored the openings and messily rummaged through the hay sticking out on top. 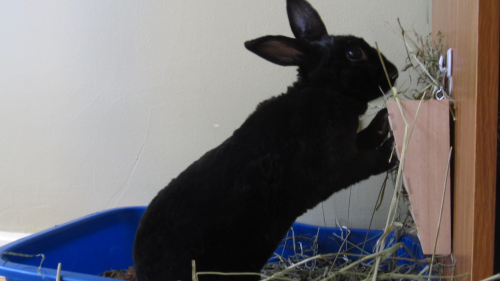 They had plenty of room to grab a bite from the front of the rack but they weren't.  I started to wonder if rabbits were drawn to the hay that looked more like the tall grass they'd find in a field.  But they also seemed to like eating the hay they'd spread across the rug, easy to reach like the cut grass of a lawn.  Could they be hardwired with a memory of what grass (food) should look like?  I felt a bit like Jackson Galaxy, the cat behaviorist on Animal Planet, only I was trying to decode rabbit behavior.   If I observed the rabbits' habits enough, I was sure to find a solution that pleased everyone in the house, right?

We removed the hay rack and replaced it with a light metal bucket intended for the displays of fake flowers, a Dollar Store find.  Lady loved it. 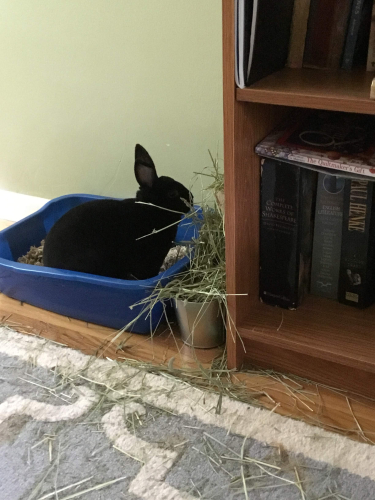 Lady with the Dollar Store bucket in the morning

Each day she'd use her teeth to pull the bucket out from where we'd wedged it between the litter box and a bookcase.  Once free, she'd grab the bucket with her teeth and flip it, sending the hay flying! 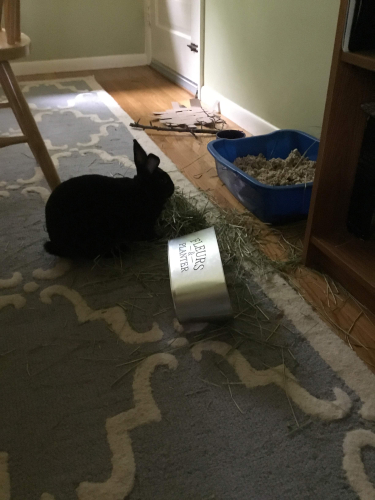 It took Bella a little longer to think of doing this, but in the end it was clear that the bucket was just a toy that briefly delayed the inevitable hay storm.  The bucket tossing was utterly adorable and a lot of fun to watch, but a real pain to clean up after.  Disheartened I rehung the tiny wooden rack. Bella feeling rather proud of herself

There had to be a way to contain the hay.  I became a bit obsessed, viewing every garden, kitchen and craft container as a potential, if unconventional, hay rack.  Would a metal shower caddy work?  What about a metal egg basket?  I finally set aside my Yankee desire to make-do and splurged on a larger (and more expensive) hay rack.  When that still didn't solve the problem I looked for ways to at least make cleanup quicker, in other words, less annoying.

I tried using the mats they sell to go under cat and dog feeding areas, but they were too small.  Ditto rubber boot trays.  For a while I spread a blanket over the area, thinking cleanup would be easier if I could simply gather up the blanket and give it a shake outside. It wasn't.  What we needed was a hay-rack-friendly version of the enclosed litter boxes they sell for cats.  If the area were enclosed the hay wouldn't travel.  If I bought a large plastic storage bin and cut off one end to make an entrance, it just might work.  I set about trying to come up with a way to cut the plastic without leaving any sharp burs the buns could get hurt on.

A few days later I was breaking down cardboard boxes to put in the recycling bin and stopped, sizing up the box in my hand.  It was big enough to fit a litter box (bunnies like to fertilize where they eat) and the sides looked high enough to serve as hay-retaining walls.  I cut off both ends (one to fit around the hay rack and one to serve as entrance) and  put the litter box in.  It all fit quite nicely.  One unexpected benefit was the way it hid the litter box from view. 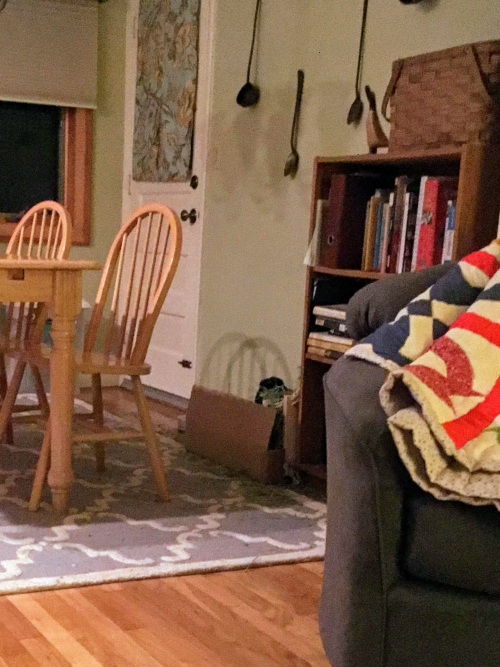 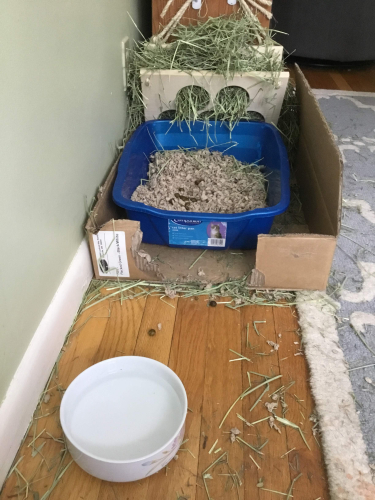 Hand Made Hay Manger (Large) from Small Pet Select, the subject of a future post

As you can see, it's not perfect, but it's the best system we've come up with so far.  The wall does a nice job of corralling the hay when Bella starts rooting for her beloved "grass tops" (the nutrient rich seed heads).  We still drop some hay as we refill the rack and Bella still carries off hay bits caught in her fur, but all in all it's an improvement. It'll do...for now.

I love reading your rabbit observations -- they're thoughtful and articulate, and this one leaves me wondering what other ordinary household objects might make a good manger...

Thanks! Online I've seen people use a plastic tube from Ikea that is intended for holding plastic bags. I've seen a large whisk used (that would never hold enough to satisfy our buns). The tricky thing is that it has to have lots of openings but can't be plastic because they might gnaw on it and ingest plastic bits.