Over breakfast each morning I check in on what's being knit in Toronto, the latest births and skills learned at a farm in upstate New York, what's on the sewing, baking and general beautifying agenda of a new mama in Portland OR, and all the adventures of a family of seven crafting a life on a farm in Maine.  There are other blogs that I check in with from time to time, but these four always start my day.  Their authors feel like friends in the way that characters in a book you've read a thousand times do. Only in blogland, there's the advantage of the story going ever on.

A very present part of that story is the changing of the seasons.  I'm sure bloggers who focus on politics, science or similar pursuits don't take a quarterly break from their usual topics to comment on the changes happening in the natural world around them, but the sort of blogs I enjoy most certainly do.  I remember September posts were rather uniform in content and December was full of the excitement (or longing) for those first fluffy flakes, but March is capricious. Come and see -

"It used to be that when March Break came along I'd swing into high gear. (For my American friends "March Break" is our equivalent to "Spring Break" except for we don't call it that on account of there's a decent chance you'll spend it shovelling snow. There's an equal chance that you'll be able to forgo the mittens, this time of year is ridiculously unpredictable.)  I don't know what all kids are like, but I can tell you that my children had an agenda - or  maybe it was really just a commitment, to having the world in absolute chaos all around them.... I was a pretty orderly mum to start with, but if you're going to lock a load of winter weary people together for days of crap weather, then you better start with a schedule of events, a strict bedtime and a cookie cutter collection that includes a few dinosaurs and maybe a moose."

"I take the milk pail and such inside and set all washables in the sink and the big pail on the counter. Boghadair knows this canister and starts rubbing his [feline] head on it. I am grateful for the 30th time it has a tight lid. I run back outside with Gibson, literally run, because I did it! I got nearly a gallon of milk from half an hours work! I run around the yard with Gibson [the dog] to celebrate. I open my arms and he jumps up into them and I feel like we have our own version of a touchdown, end zone dance. Merlin [the horse] is watching this, totally unimpressed. He hollers at us in his deep, British, voice and Jasper [the pony] just stares alert as a buck in a field. His little white splotched body all taunt with prick ears and wide eyes. I get to the work of morning feeding and soon every heckling sheep, chicken, rabbit, goose, horse, and pig has nothing to say to me but crunch, chomp, griiiiind, crunch, chooommmp, swallow, repeat. With everyone outside content I am finally free to see to the funnest job of the morning. KID TIME!

I let the kids [baby goats] out of the big dog crate and they pile out. Before they can even think about peeing on my floor I scoop them up and take all three outside with Nanny Gibson to keep an eye on them while I return for their bottles. When I come outside I can see all of them jumping and tumbling, Gibson frantic to restore some sort of order."

"When our plum tree blooms, there's no mistaking: Spring! It's here. We cleaned up the yard. We went for walks past other peoples' yards. We got frozen yogurt. We bought daffodils. We scheduled the window-washer dude. He'll also de-mossify the roof. We turned off the heat during the day and forgot to turn it back on at night. We talked about weather to anyone and everyone. We went to the plant nursery. We closed the windows when it turned out it was actually still pretty cold. We heard birds. We saw birds."

This post has gorgeous photos full of colors you may have forgotten over the winter even exist.

"There can be no doubt that spring is on its way now. The maple syrup is filling up the pantry shelves, I'm washing muddy floors every day, and now this!  We got the early morning post office call yesterday, and quickly readied the brooder that will see a lot of action in the months to come (there's a brooder schedule, yes indeed). It is nice, I dare say, being in somewhat of a groove of things after a few years here now. Our third spring on the farm, and everything is in place, with systems only needing touching up here and there (thank you, duck tape and baling wire, we love you so)."

These posts, full of everything from snowy forecasts to sleeping with the windows open, were all written in a week, March 11th through the 14th.  It's a wonder-filled world indeed.

I'd like to close with a snapshot of March in my corner of the world.

Lexington, MA home of Ever Onward 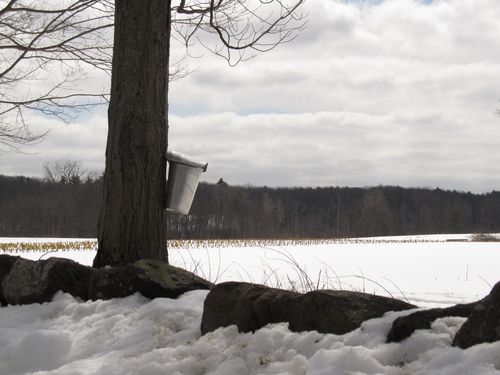 The following video was shot in the same location last spring.  The collection of maple sap is the first sign of spring in this area, even earlier than the arrival of Red-Winged Blackbirds and Snow Drops.  Tthe silver buckets alongside the farm fields remind me that other unseen preparations for life are taking place under all that snow.

Spring will be here too before I know it.